We aren’t all equally afraid of the same things. But Scripture’s wisdom can apply to all of us. 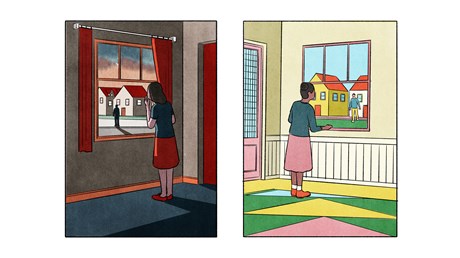 The 10-minute commute from home to my office at church has always had risks. Driving carries its own inherent danger. Then I have to find parking (sometimes in the dark, and often as the first car there); navigate the security alarm; and if a male coworker arrives, consider the risk of being a woman alone in a building with a man.

Twenty years ago, I found driving somewhat scary and walking across the parking lot alone terrifying; but being in the office with a Christian brother did not worry me one bit. Today, however, while driving remains something I’m careful about, I hardly think about getting out of my car once parked, and I’m considerably more aware of the male-female office dynamics. What caused the shift?

In many ways, moving from South Africa to the US decreased my fear levels because the actual risks were lower. Driving in South Africa is statistically more dangerous than it is in the United States. Walking alone as a woman is less dangerous in Northern California (South Africa regularly claims the highest rape rate in the world). Over time, my fear lessened, recalibrating to the new risk levels.

But my perceived concerns about being alone with a male coworker increased when we moved to the US, even though I had no reason to think the risk of impropriety had actually changed. I found myself in a local church culture far more anxious about male-female interaction and needed to adapt my awareness accordingly.