The ancient mosaics, identified by the biblical heroine’s telltale tent stake, were discovered during a synagogue excavation in Galilee. 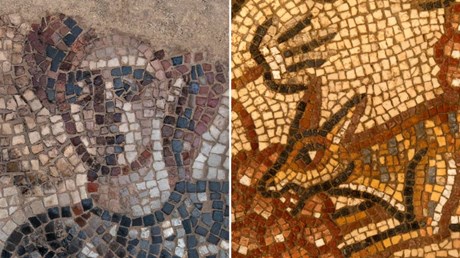 The earliest known depiction of biblical heroines Jael and Deborah was discovered at an ancient synagogue in Israel, the University of North Carolina at Chapel Hill announced last week. A rendering of one figure driving a stake through the head of a military general was the initial clue that led the team to identify the figures, according to project director Jodi Magness.

“This is extremely rare,” Magness, an archaeologist and religion professor at UNC-Chapel Hill, told Religion News Service. “I don’t know of any other ancient depictions of these heroines.”

The nearly 1,600-year-old mosaics were uncovered by a team of students and specialists as part of The Huqoq Excavation Project, which resumed its 10th season of excavations this summer at a synagogue in the ancient Jewish village of Huqoq in Lower Galilee. Mosaics were first discovered at the site in 2012, and Magness said the synagogue, which dates to the late fourth or early fifth century, is “unusually large and richly decorated.” In addition to its extensive, relatively well-preserved mosaics, the site is adorned with wall paintings and carved architecture.

The fourth chapter of the Book of Judges tells the story of Deborah, a judge and prophet who conquered the Canaanite army alongside Israelite general Barak. After the victory, the passage says, the Canaanite commander Sisera fled to the tent of Jael, where she drove a tent peg into his temple and killed him.

The newly discovered mosaic panels depicting the heroines are made of local cut stone from Galilee and were found on the floor on the south end of the synagogue’s west aisle. The mosaic is divided into three sections, one with Deborah seated under a palm tree looking …