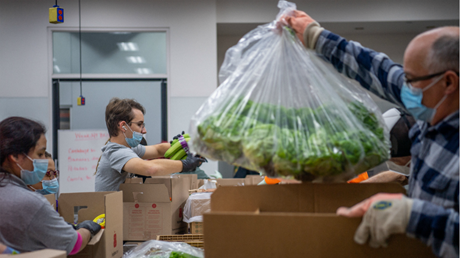 Grant Hasty sees the impact of inflation in the increasing requests for food at Crossroads Community Baptist Church in Stearns, Kentucky. And he feels it every time he fills up the truck the ministry uses.

“It’s about double what it was a year ago just for the fuel to pick up the food to give away,” the pastor told CT.

According to a July 13 report from the United States government, inflation has gone up more in the last year than any time since 1981. The cost of cereal has increased about 14 percent in the last 12 months, and fruits and vegetables are up more than 8 percent. The cost of butter and margarine increased by 26 percent.

Gasoline prices have increased more than they have at any time since 1980, going up nearly 60 percent from June 2021 to June 2022.

In Stearns, Kentucky, that means a lot more people are asking for help. The church has seen people from all age demographics hit hard, but particularly those on fixed income.

“Their fixed income hasn’t risen the way the cost of everything else has,” Hasty said.

Yet isn’t only individuals, struggling with inflation. Ministries have been hard hit too. Church food pantries and soup kitchens across the country are trying to meet the increasing need, while at the same time they are also forced to pay more and more for food, gas, electricity, and other operational expenses.

Northside Food Pantry, at a Presbyterian church in Indianapolis, told CT it was spending about $6,500 per month on food in the spring of 2021. The ministry spent another $1,000 on household and hygiene items to give away to people in need.

This spring, the ministry spent an average of $12,000 per month—a spike driven by both need and increased costs.