Founded by an enslaved minister in 1776, the historic Baptist site had been covered by a museum parking lot. 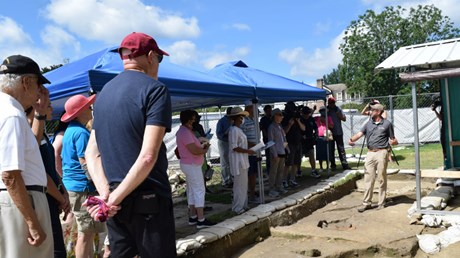 It’s different when you get down to the bone.

Jack Gray, director of archaeology at the Colonial Williamsburg Foundation, can get excited talking about the excavation of old post holes and brick foundations. He’s thrilled when his team finds bits of bottles, old coins, and the porcelain foot of a long-lost baby doll, giving them a glimpse of what life was like at a historic Baptist church where enslaved Black people lifted their voices to God.

But the buried remains of these faithful Christians—once covered over by a parking lot—reveal their full humanity.

“It doesn’t hit you until you see a bone you recognize: That’s a piece of a person. You are touching another human,” Gray told CT.

The Colonial Williamsburg archaeologist and his team started excavating the 40 or 41 graves at the church on Monday, slowly and carefully removing about a foot of soil from the first three sites. They believe it is one of the oldest Black congregations in America, founded at the time of the Declaration of Independence by an enslaved man named Gowan Pamphlet, who was a given special allowance for ordination by the woman who owned him.

The building that housed the congregation was demolished in the 1950s as part of the ongoing reconstruction and restoration of the former capital of colonial Virginia. No one in authority at the time appears to have thought the church was an important enough part of that history to preserve, continuing the generations-long practice of diminishing or even erasing Black people from the American story.

Connie Matthews Harshaw, a descendent of the Christians who worshiped there, started pushing and organizing for the recovery of the church in 2019. She convinced Cliff Fleet, …