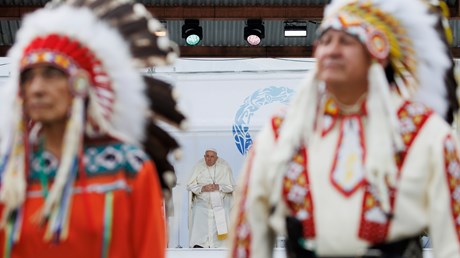 The fire was eerily reminiscent of the more than 50 churches that were defaced or destroyed across the country a year ago, weeks after the discoveries of the remains of residential school students began making international headlines.

This month’s fire started in a back alley on July 6, according to Dawson. By the next morning, the church’s two-story building was completely ravaged. Fire inspectors are still investigating the incident to determine whether the blaze was deliberately set.

Dawson is from the Nuu-chah-nulth Nations on the western end of Vancouver Island. She serves as lead pastor of Street Church, which is part of the Foursquare network of churches in Canada and was founded by an indigenous person. Its pastoral team are all alumni of First Nations Bible College.

The pope’s apology has galvanized Dawson’s desire to share Christ with other indigenous peoples. “I find it more urgent than ever to find a new building [for my church],” she said.

“What the priests and nuns at these residential schools did to us was evil,” Dawson said. “But the worst thing they did to us: They made us indigenous people hate the name of Jesus.”

On Monday (July 24), Francis apologized for the Catholic church’s role in setting up Canada’s residential schools and perpetuating decades of abuse against First Nations, Inuit, and Métis children.