School claims attorney general is “interfering in the religious decisions of a Christian university.” 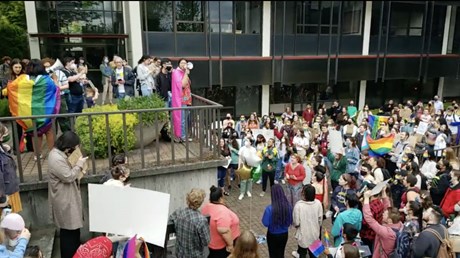 Seattle Pacific University, a private school associated with the Free Methodist Church, was the site of daily protests for more than a month earlier this summer as students challenged a school policy that prohibited the hiring of LGBT people. Dissenting students called the policy homophobic and discriminatory.

Now, the university says its rights are being violated by Washington state Attorney General Bob Ferguson, whose office launched an investigation into the school’s hiring practices.

Seattle Pacific University is suing Ferguson, claiming his probe aims to influence the university “in its application and understanding of church teaching,” according to the claim filed Wednesday, July 27, in US District Court for the Western District of Washington. The university is represented by Becket Fund for Religious Liberty.

Becket Senior Counsel Lori Windham, in a statement, said Ferguson singled out the university “because of its Christian beliefs, demanding information about the school’s religious hiring practices and employees.” She said the university is asking a federal court to stop him from “interfering in the religious decisions of a Christian university seeking to remain true to its faith and mission.”

Ferguson’s office did not respond to an email requesting comment.

Students and others fighting against the hiring policy said in a statement that the lawsuit shows “the university is still painting a portrait of a school that is being persecuted by outside forces for practicing their faith.”

“We know this is not an issue of religious freedoms; rather it’s an issue of the people in power failing to uphold the university’s commitment to it’s …