Most Christians in the movement disagree with a vocal minority that pushes to criminalize women and opposes legal measures short of outright bans. 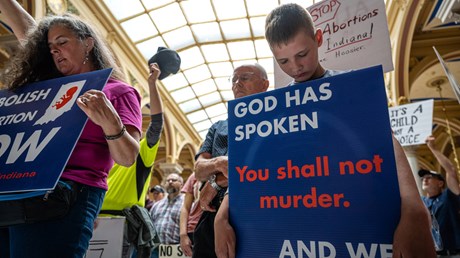 The overturning of Roe v. Wade has brought new attention to a small but growing group of pro-life Christians who identify as “abortion abolitionists.”

This vocal minority rejects incremental steps toward outlawing abortion and reserves strong criticism for those who accept anything other than a federal ban equipped with criminal penalties for all involved.

“The very foundation of the gospel is the law of God,” said Tom Ascol, the president of Founders Ministries, in a recent documentary from abolitionist group End Abortion Now. “God defines what’s sin: You shall not murder. And that’s true from the moment of conception until the natural ending of life.”

Ascol is also a pastor who ran for president of the Southern Baptist Convention (SBC) in June. For two years in a row, abolitionists like Ascol spoke up at the SBC’s annual meeting to push the denomination to take an abolitionist stance.

In 2021, they proposed a rigid resolution for “immediate abolition of abortion without exception or compromise.” It passed only when amended to allow for an “incremental approach,” the opposite of what they wanted. This year’s proposal was not brought for a vote, though several pastors criticized the SBC’s Ethics and Religious Liberty (ERLC) Commission’s campaign to make abortion not just illegal but “unthinkable.”

The move to entirely abolish abortion, rather than cut back or adjust laws to restrict the procedure, is inspired by slavery abolitionists like William Wilberforce, who was monumental in ending Britain’s participation in the slave trade in 1807. As a whole, many pro-lifers (not just abolitionists) view abortion as parallel …