An investigation found a “culture of unchecked power” at a Virginia college. Denominational leadership has declined to speak about it publicly. 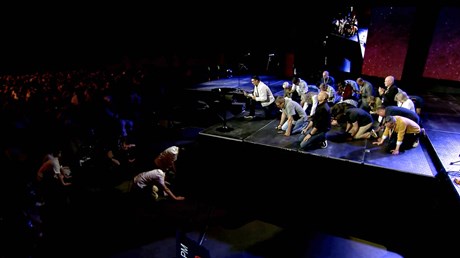 The International Church of the Foursquare Gospel has suspended a safeguarding team that was working with students who accused a former college president of manipulation, bullying, and harassment.

Members of the team—along with Foursquare ministers and former students at the affiliated school in Christiansburg, Virginia—were raising questions about how the Pentecostal denomination handled a third-party investigation into the allegations. Godly Response to Abuse in the Christian Environment (GRACE) found that Mike Larkin, president of Ignite Life Pacific University, misused his authority and that Foursquare failed to set up adequate structures of oversight and accountability.

But at the denomination’s national convention in June, ministers demanded to know why they hadn’t heard any specifics about GRACE’s report. They criticized board members for not taking abuse seriously enough and voted to recommend the 11-member safeguarding team be given more power and freedom from board interference. In late July, the board informed the team their work would be put on pause.

Larkin, a Los Angeles cop who became a charismatic minister in the 1980s, was a prominent figure in The Foursquare Church until he resigned from the Virginia school in 2019. Starting in the late 1990s, he served in the national leadership of the 100-year-old Pentecostal denomination with an estimated 255,000 regular attenders. Then Larkin turned his attention to discipleship and education. He launched Ignite at the flagship Foursquare school in Southern California in 2008. He called it a “reproducible, hands-on ministry where discipleship, academics, global ministry and local community outreach are all synchronized together.” …