Historically, evangelicals have been ahead of the curve in women’s education and also way behind it. My pursuit of an MDiv is now part of that mixed legacy. 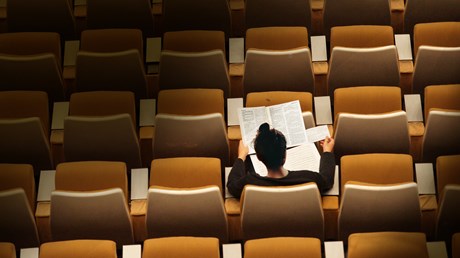 These last few months of applying to schools, securing funding, and planning out our schedules have been a sweet time for us. In God’s wisdom, he’s decided that we’ll share these milestones. But this time has also made me wrestle with how the evangelical church both facilitates and impedes women’s academic development.

My education story doesn’t begin with me and my daughter. It starts with my maternal grandmother, who left home at 16 to attend college—not because she was drawn by academics or a career but because she felt called to a life of Christian service.

She came of age during the post–World War II years, when a great youth revival was sweeping the nation. As my grandmother’s best friends settled into lives of factory work and marriage, she moved 800 miles away to study for church work. There she eventually met my grandfather, who was funding his own ministerial training through the GI Bill.

Ironically, my grandmother never considered herself much of a student and even decades later carried a sense of “imposter syndrome,” despite her college degree. But her brave steps established a norm for her daughters, who all pursued higher education—at least higher Christian education.

The same evangelical culture that called my grandmother, mother, and aunts to higher education also reminded them of the importance of home and family, and the balancing …