Reforms have legalized 2,400 Christian structures, yet Abu Seifein represents problems from when construction and repair permits were impossible to obtain. 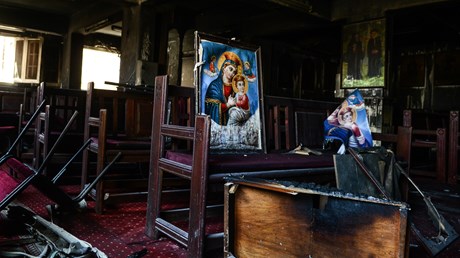 As Egypt reels from the tragic church fire that killed 41 worshipers on Sunday, many search for where to put the blame.

“God forgive the fire department,” said Ishak Henin, a deacon at Abu Seifein Coptic Orthodox Church in Imbaba, a dense urban neighborhood of Cairo. “If they had come earlier, they could have saved more people.”

Abu Seifein means “the father of two swords” and is the Arabic moniker for second-century martyr Saint Mercurius, whose icon reflects his military origins.

But the word church may give the wrong impression to overseas audiences, as the sanctuary was located between ground floor shops and towering residences. Illegally repurposed in 2007 from one of many tightly packed apartment complexes, the now-charred chapel traced back to an era when Egyptian Christians were unable to obtain permits to build new houses of worship.

The law was changed in 2016, and a Coptic legal expert stated Abu Seifein was officially licensed in 2019. Since the latest batch in April, the slow-moving process has now legalized 2,401 churches and affiliated service centers.

Yet many remain in their original condition, below safety codes, and according to the law full legality can only come once all regulations are satisfied.

Abu Seifein's four-story building housed two daycare facilities, and 18 children died in the blaze. Around 100 people were present at worship that morning; authorities stated most deaths—which included the local priest—were caused by smoke inhalation and the resulting stampede.