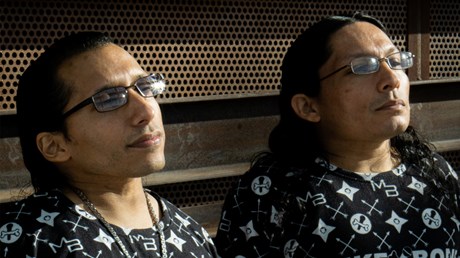 When Lil Mike and Funny Bone (who perform as the hip-hop duo Mike Bone) auditioned for the television show Reservation Dogs, they never expected the series to gain much attention outside the Native American community.

Co-created by Sterlin Harjo and Taika Waititi, the show follows the lives of four Native American teens in Oklahoma and finds humor in some of the dark realities of reservation life. Now in its second season on FX, the critically acclaimed series received a Peabody and has been nominated for numerous other awards.

Fans of the show may not know that Lil Mike and Funny Bone—who appear as Mose and Mekko, respectively—have been Christian hip-hop artists for nearly 25 years. Using a style that draws together rap, dance, and comedy, they got their start performing at churches and house parties and eventually appeared on America’s Got Talent in 2013.

CT spoke recently with the duo about using music to fight Satan, throwing pajama parties for Jesus, and working on Reservation Dogs.

Some of our readers will be familiar with you through the show Reservation Dogs, but they may not know about your musical work and careers up to this point. How long have you been making music as Mike Bone, and how did you get started?

Lil Mike: So I started making music in 1992, and it was a form of therapy. I had anger issues. I would black out and try to hurt people. So, they told me, write out your problems instead of acting out. In 1997, we joined together. Funny Bone came and got in and did some comedy.

Funny Bone: Yeah, I would jump on stage and do something funny while he was switching out songs. And then I slowly started to write my own rhymes. I got some skits on different tracks where I’m like slapping Satan, …