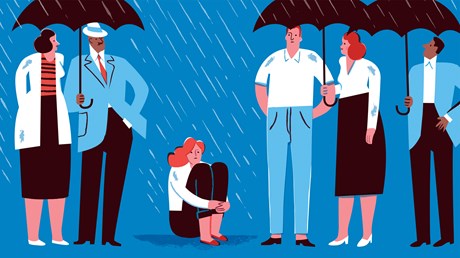 As the abuse crisis roils American evangelicalism, church leaders are finally paying attention, if only because the accretion of cases is now impossible to ignore.

Commentators on the Left have eyes on it, too. Among the various cries, some progressives are calling out Christian conservatives for policing the issue of sexual orientation and gender identity (SOGI) while simultaneously dismissing abused women in their own midst.

“Youth leaders were fondling us and raping us and shaming us into silence,” said Julie Rodgers at the start of the #churchtoo movement. “Meanwhile, we heard the gays were the greatest threat to the church and society.”

“If the SBC hated abusers as much as they do gay people … we literally wouldn’t be having this conversation today,” tweeted Matthew Manchester in response to the recent Southern Baptist Convention report revealing widespread abuse and coverup. Others have voiced similar concerns about “a perverse double standard.”

We’re looking at “the largest crisis of institutional religion in the United States,” according to Washington Post columnist Michael Gerson, and that crisis has been caused in part by Christians losing sight of the fundamentals. While biblical sexual ethics most definitely apply to SOGI—as well as marriage and singleness—they start with the simple act of protecting women and men from exploitation. Everything else follows from that.