But the liberty at stake is moral and spiritual, not just intellectual. 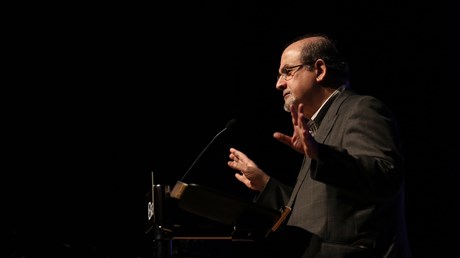 In the days since a brutal attack on Salman Rushdie, the world has seen an outpouring of solidarity. The phrase “We are all Salman Rushdie” appeared on Twitter profiles and in countless articles, acknowledging that threats to one person’s freedom of expression are a threat to all.

In the New Yorker, Adam Gopnik anticipated efforts “to somehow equalize or level the acts of Rushdie and his tormentors and would-be executioners.” That approach is despicable, he wrote, “because the right to be insulting about other people’s religions … is a fundamental right, part of the inheritance of the human spirit. Without that right of open discourse, intellectual life devolves into mere cruelty and power seeking.”

In The Atlantic, Graeme Wood eviscerated “those who muddle the distinction between offense and violence, and between a disagreement over ideas and a disagreement over whether your head should remain attached to your body.” He continued, “Now that Rushdie’s head has been partially detached, and on American soil, I hope these distinctions will need no further elaboration.”

These articles, like countless others, anticipated mealy-mouthed responses condemning the attacks while suggesting the novelist maybe had it coming. But instead of that debate, the attack has renewed extant culture wars related to moral boundaries and who draws them.

School boards across the country are a particularly combustible battleground. Phrases like “cultural genocide,” “erasure,” “heteronormativity,” and “CRT” are hurled like grenades at board members responsible for adjudicating objections to curricula …