English bishop and Oxford scholar cultivated unity, dialogue, and respect between the ancient faith and evangelicals. 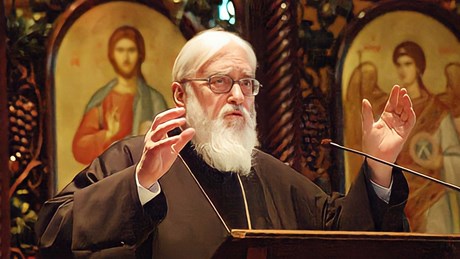 As Orthodox Christians commemorate Metropolitan Archbishop Kallistos Ware, who fell asleep in the Lord early Wednesday morning in England at age 88, evangelicals also have a loss to mourn and reason to pray, as Orthodox funerals do, “May his memory be eternal.”

Born Timothy Ware in 1934 and raised in an Anglican family, he converted at age 24 and became one of the most influential Eastern Orthodox theologians in the English-speaking world in the 20th and early 21st centuries.

His most famous books were The Orthodox Church, the standard introductory textbook for nearly 60 years; The Orthodox Way; and The Philokalia, a classic text of Orthodox spirituality which he co-translated. He served as the Spaulding Lecturer in Eastern Orthodox Studies at Oxford University for 35 years until his retirement in 2001, and many of his doctoral students acquired influential posts.

After Oxford, Ware continued to publish but focused the remaining years of his life on strengthening the internal life of the Orthodox Church and on building bridges with non-Orthodox Christians, including Catholics, Anglicans, and evangelicals. A person like him only comes around once in a century.

Bishop Kallistos’ work changed the landscape between Orthodoxy and evangelicalism, and his contributions can best be understood by situating them at a time when evangelicals first developed interest in the ancient faith.

This interest began indirectly in the 1970s with Robert Webber, a theology professor at Wheaton College. His writings made the early church attractive to evangelicals by stressing the positive role of church tradition and liturgical forms of worship. He also documented a sizable movement of evangelicals into Anglicanism in his book, Evangelicals …