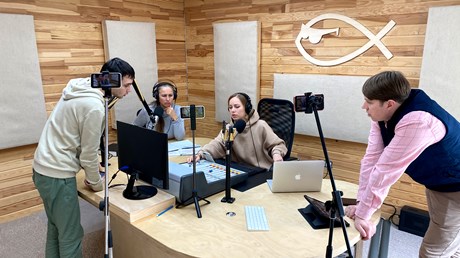 A new language law in Ukraine has complicated ministry to Russian-speaking citizens. Comparing restrictions to the Soviet era, one Christian broadcaster is relocating to Budapest, Hungary.

“I don’t want our staff busted on the air for reading the Bible in Russian,” said Dan Johnson, president of Christian Radio for Russia, which operates New Life Radio (NLR) from Odessa on Ukraine’s Black Sea coast. “We were expecting bombs to wreck our radio operations, but it turned out to be this law.”

Last month, Russian missiles landed one mile from their studio.

But earlier in July, President Volodymyr Zelensky signed into law a near-complete ban on Russian music on radio and television. Passed by parliament with a two-thirds majority, it exempts pre-independence classical artists like Tchaikovsky and Shostakovich as well as modern composers who have condemned the war.

About 65 percent of NLR airtime is music. Though local Christian anthems have inspired many during the war, Johnson said most contemporary worship songs are in Russian, even those originating from Ukraine.

A 2021 national survey identified 22 percent of the Ukrainian population as native Russian speakers, with 36 percent speaking the language primarily at home. Concentrated in the eastern Donbas and southern regions where Russian troops have prioritized attack, there are fears that Moscow is preparing to annex certain occupied areas.

Johnson has fled restrictions before. He moved to Russia in 1991 and by 1996 began radio ministry in Magadan, a featured city in Aleksandr Solzhenitsyn’s The Gulag Archipelago. Kicked out in 2006, he continued ongoing satellite-based radio work in Moscow, broadcasting throughout the former Soviet Union. …