But it doesn’t mean what you think it means. 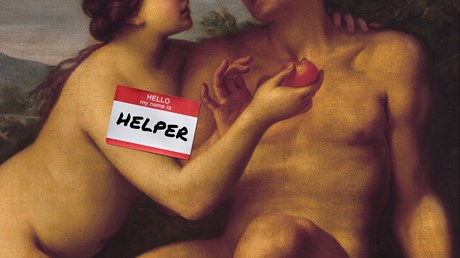 A recent LifeWay Research study asked American Protestant pastors if women in their congregations were allowed to take on six specific leadership roles.

Views on preaching were predictably split, but roughly “9 in 10 pastors say women could be ministers to children (94%), committee leaders (92%), ministers to teenagers (89%), or coed adult Bible study teachers (85%) in their churches,” according to Aaron Earls. Fewer (64%) said women could be deacons.

The question of where a woman can serve in church “has been debated for centuries with biblical scholars in different denominations coming to different conclusions about what Scripture means,” said Scott McConnell, executive director of Lifeway Research.

The first part of the Bible, in particular, plays a key part. Generations of Christians have looked to the creation stories in Genesis 1 through 3 as the paradigm for gender roles. “As Genesis 1–3 go, so goes the whole Biblical debate,” says Raymond C. Ortlund Jr.

The word “helper” from Genesis 2:18 has long been a hinge-point in these debates. Some use it to argue that a wife’s main role is to support her husband’s leadership. Others deploy it to justify strong views on female submission and service. And still others have construed the idea as softly as possible, saying, “God made man as a gracious leader and woman as an essential helper in marriage.”

But what if we’ve gotten that word wrong? The subservient overtones that often come with it are nowhere to be found in Scripture. And our misinterpretation has gotten us into trouble in how we view male and female roles.

The more accurate take, at least as I see it, is significant to those in both the …