Tolkien’s kingdom of Númenor is a cautionary tale for us today. 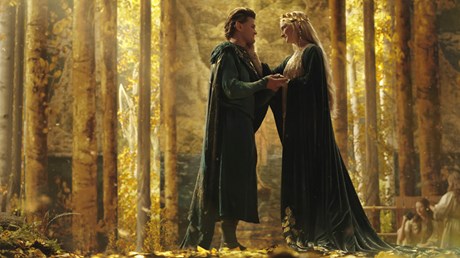 A charismatic demagogue seduces a mighty empire, winning power with promises to restore past glory. A people betray their founding principles, apostatizing from the faith of their fathers to pursue dreams of immortality. Their great city teeters on the brink of civil war. A faithful remnant is hounded as traitors by a mob hellbent on ruin.

Neither a summary of Old Testament prophets nor of yesterday’s New York Times, these are some of the stories in J. R. R. Tolkien’s The Silmarillion—the lore bible of Middle-earth. Long overlooked, the stories have finally found their moment in the limelight.

Amazon’s The Lord of the Rings: The Rings of Power is upon us.

Reputedly the most expensive television show ever produced, the $1 billion project is an adaptation of a very small part of Tolkien’s oeuvre. In the author’s fictional timeline, Middle-earth’s history unfolds over three ages. Most of The Silmarillion concerns the First Age. The more famous and beloved book and movie trilogy, The Lord of the Rings, covers the end of the Third Age. Amazon’s new TV show is set squarely in the middle.

Tolkien wrote almost nothing about this period. Yet what little he did craft vibrates with political resonance. In the 23 short pages of “Akallabêth,” a chapter in The Silmarillion, Tolkien tells of the kingdom of Númenor’s glory and also its hubris and folly.

In half of the next chapter, “Rings of Power,” Tolkien writes about the eponymous rings and essentially describes World War III—a cataclysmic conflict so destructive that, although the good guys won, the world never recovered.