As in the past, one can learn about our nation’s political divides by looking at our religious ones. 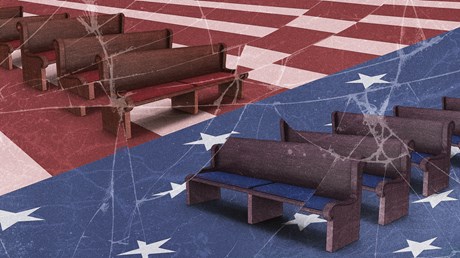 An uncanny number of people are imagining the looming collapse of the United States.

Some speak openly of preparing for “civil war,” while others crow about the need for a “national divorce” between red and blue states. Most, though, whisper these thoughts. They look at a country seemingly at the breaking point and begin to wonder whether we may indeed be heading for a national conflict of some kind.

To answer such questions, perhaps even the most secular Americans should look to a religious phenomenon that has proven in years past to be a leading indicator of our nation’s future: church splits.

In the Baptist tradition, the year 1845 was key—we learned about it in church history alongside other momentous years like 325 (the Council of Nicaea) and 1517 (the start of the Protestant Reformation). In 1845, the denominational structure I grew up in—the Southern Baptist Convention—was formed.

We always spoke of our founding as having been spurred by a passion for world missions and evangelization. And yet most of us knew that 1845 wasn’t really a “founding” at all; it was a split. Yes, there was a dispute between northern and southern Baptists over the nature of missions—but the real debate was over whether to appoint slaveholders as missionaries.

What’s relevant about this split is, first, that it happened alongside similar splits in almost every other American Protestant denomination, most notably the Methodists and the Presbyterians. What’s also noteworthy is the timeframe: These splits happened well before the actual onset of civil war—the …