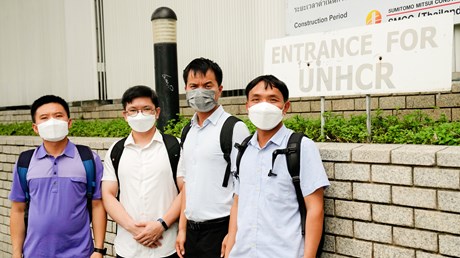 Pastor Pan Yongguang and nearly all of the 61 members of his Chinese house church have arrived in Thailand. The congregation left the southeastern city of Shenzhen for South Korea between 2019 and 2020, trying unsuccessfully for months to gain refugee status.

Last month, the group left Jeju Island for Bangkok, hoping to appeal to the UN refugee office. Their search for a home continues as they hope to make one more move in the near future, this time to the United States.

It’s a search that has come at a significant cost.

The congregants of Shenzhen Holy Reformed Church (SHRC) left their professional jobs, their homes in Shenzhen, and elderly parents—just before the start of the pandemic. Pan has shouldered the responsibility of not just the spiritual care of his congregants, but the logistics of everyday life—including work, housing, medical care, safety, and travel—in foreign countries. He’s also faced pushback from some Chinese churches who believe he should stay and face persecution rather than run away.

But he believes he’s following God’s call to lead his church to greater freedom, like the Pilgrims aboard the Mayflower: “For the flock’s spiritual blessing I’ve invested more and paid a higher price,” Pan said. “Nobody flees like this with kids and women from one county to another. This isn’t fleeing. This is leaving Egypt.”

After quietly leaving the South Korean island of Jeju in late August, Pan announced his congregation’s latest whereabouts to the world through a Wall Street Journal (WSJ) article on Monday. That same day, congregants applied for refugee status at Bangkok’s UN refugee office. Their hope to resettle in the United …