The “arty pilgrimage” through Leicestershire has given her a chance to share and deepen her faith. 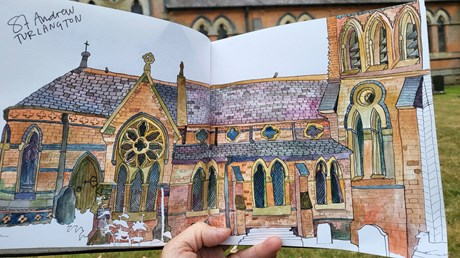 As England loses a number of its churches and rethinks the role of church buildings, one artist is finding a new appreciation for the over 300 churches in her hometown by drawing each and every one.

Art teacher Hayley Fern pulled out a new sketchbook during a visit to Leicester Cathedral and drew the 900-year-old Gothic-style church, with its pointed arch windows and 220-foot spire.

“Somebody actually said, ‘Oh, are you doing all Leicestershire churches?’” Fern said. “I said, ‘Oh, that’s a good idea. I might just do that.’”

And that’s how her “arty pilgrimage” began.

In her county in central England, there are over 300 Anglican churches, quite a lot but still an obtainable goal, she decided. With each church she adds to her sketchbook—and her social media feeds—she’s learned about nearby places she’d never been or only passed through.

“When you’re visiting a church, you go to the absolute heart of the place. You’re going to the original center of the village or town, the highest point, and it’s often the oldest part,” Fern said. “I’m now really discovering that even the villages and towns that I wasn’t necessarily drawn to actually have these beautiful centers, and the community is really evident there as well.”

A former freelance illustrator, she uses a fine waterproof pen to draw the details: porches and porticos, stained glass windows, neat bricks and cobblestone. Then she fills in with watercolor. Each drawing gets labeled with the church …