This election season, love your neighbor by supporting voter results, a free press, and a peaceful transfer of power. 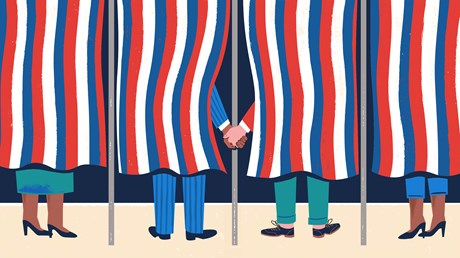 The midterms election season is not the easiest time to feel good about American democracy.

We’re inundated with negative campaign ads that often distort the records of opposing candidates and portray them in the worst possible light. Each side warns that the election of the other party means disaster for the United States on an apocalyptic scale.

Can Christians really defend a democracy like this? Yes. We can and we should. And there’s no better time to do it than now.

Democracy is currently facing an unprecedented crisis, both in the United States and around the world. According to V-Dem Institute, the world’s leading research group for tracking democratic progress, there are only 34 liberal democracies in the world, the fewest since the mid-1990s. And only 13 percent of the world’s population lives in one of those countries—down from 18 percent 10 years ago. (V-Dem ranks the United States No. 29 in the list of liberal democracies, and its score is rapidly falling.)

Some countries that lose their democratic status fully autocratize and become military dictatorships. But V-Dem’s recently released 2022 report suggests that the much more potent threat to democracy is not dictatorship but rather what the institute calls “electoral autocracy.”

Under that system, elections continue to be held, but the government rigs the political process by controlling the media, harassing critical journalists, …