In a world of fear and turmoil, the story of Noah brings baptismal hope. 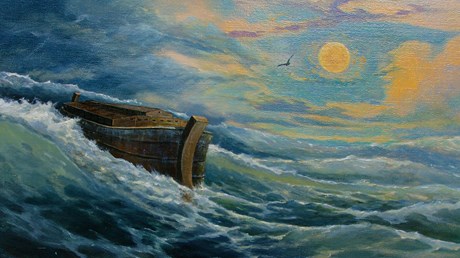 A few weeks ago, a commentator identified what he believes to be the dominant mindset of our time. He calls it “ark head,” borrowing from the biblical account of Noah and the flood.

“Ark head,” argues Venkatesh Rao, happens when we give up on solving our big global problems and look instead for an “ark” in which to ride out the storms of this age of anxiety.

Rao points to the numbness with which most people see the “snowballing global problems and crises we’re hurtling towards,” whether the prospect of a nuclear World War III, another global pandemic, or a collapsing economy. He speculates that even news of an alien invasion would be greeted with a What can you do about it? sort of bored acceptance. This, he writes, is a coping mechanism for people in a new dark age.

The point of an ark, after all, is to “survive a cataclysmic flood while preserving as much of everything you care about as possible,” Rao writes.

For some in the tech sector, the ark could be cryptocurrency, artificial intelligence, or the metaverse. Others seem to be scaling down to their narrow subcultures of work or interest or personal life.

“If you can retreat within it, and either tune out or delusionally recode the rest of reality, it works as an ark,” Rao says.

If “flood geology” is the view advocated by some creationist groups to explain phenomena such as the Grand Canyon, I suppose one could call Rao’s thesis a kind of “flood psychology.”

His metaphor caught my attention because I’m currently teaching through Genesis 1–11 (which includes the Noah narrative) in a Sunday seminar at my church. I stopped to wonder if his metaphor might actually …