In the wake of Dobbs, federal prosecutors have filed more than a dozen federal indictments against protestors obstructing access to abortion clinics. 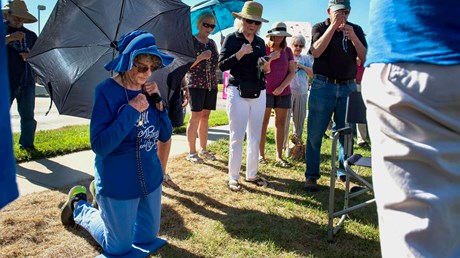 In the past month, the Department of Justice (DOJ) has indicted more than a dozen pro-life protestors across the country for obstructing access to abortion clinics.

Such prosecutions have been rare historically, with just a case or two annually for the last decade. But after the US Supreme Court reversed Roe v. Wade this summer, the DOJ announced a task force to pursue more enforcement against anyone obstructing access to abortion clinics. Many of those protestors facing charges are Christian.

The Freedom of Access to Clinic Entrances Act, or FACE Act, prohibits obstruction of access, threats, and destruction of clinic property. In these recent charges, protestors face up to 11 years in prison. Pro-life activists say the recent prosecutions seem politically motivated; some are now facing charges for incidents that date back more than a year.

An October 5 indictment of 11 protestors in Tennessee was about an abortion clinic blockade in March 2021. One case filed October 14 against a pro-life protestor concerned an incident from two years ago, when a group of protestors allegedly tied themselves with ropes and chains inside a clinic, blocking access.

Edward Mechmann, a former federal prosecutor who now is the director of public policy for the Catholic Archdiocese of New York, told CT it was “strange for the feds to go searching for old cases, especially for relatively minor crimes that would usually be dealt with by local prosecutors.”

Mechmann said he was surprised by “the heavy hand” in the blockade indictments. Though blockading a clinic is a violation of FACE, he thinks the DOJ could have pursued civil remedies without going straight to criminal prosecution.

“My suspicion is that a directive has …