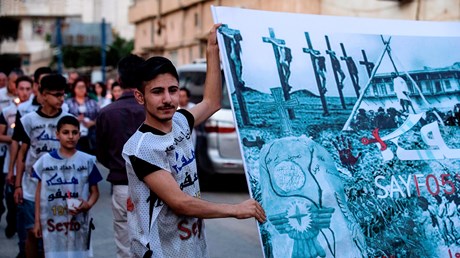 In the waning days of the Ottoman Empire, evangelicals laid down their lives for their Lord. Living in Nusaybin, once home to the ancient theological school of Nisibis, they were among the firstfruits of the Sayfo (“sword”) martyrs.

Overall, modern estimates posit half a million deaths of Syriac-Aramean Christians at the hands of Turkish and Kurdish soldiers, concurrent with the Armenian genocide that claimed 1.5 million lives. Today this Christian community, still speaking the language of Jesus, seeks its own recognition.

In June 1915, the Muslim-majority city—now located on Turkey’s southeastern border with Syria—had about 100 Syrian Orthodox families, and an equal number belonging to other Christian sects. The Protestants were rounded up with Armenians and Chaldeans, marched to the front of town, and shot dead.

The Orthodox families were promised peace by the local leader, but 30 men fled and sought refuge in the rugged mountains. A monk, trusting authorities, led soldiers to their hideout seeking to reassure the frightened band.

According to reports, along the way they turned on the monk, demanding he convert to Islam. Upon his refusal, they cut off his hands, then feet, then head. Returning to Nusaybin, the soldiers assembled the remaining Christians, leading them out of town. In joyful procession the believers sang hymns of encouragement: Soon we will be with our Lord Jesus Christ.

Refusing conversion, one by one they were shot, and then dumped in a well.

In 1919, then-Syrian Orthodox Archbishop Aphrem Barsaum filed a report to the prime minister of Britain, after the Allied powers displaced the Ottomans. Similar massacres had been repeated in 335 other villages in the archbishop’s jurisdiction, …