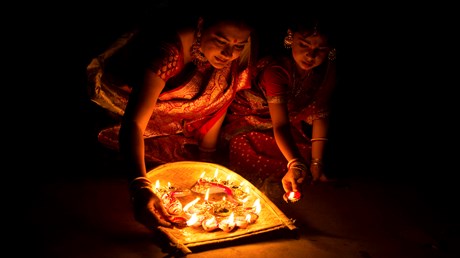 Rivaling the scale of Thanksgiving or Christmas in the United States, Diwali has become India’s biggest holiday season.

The Festival of Lights (also known as Deepavali) marks the start of the Hindu New Year and is the faith’s most important festival, celebrated for five days by more than a billion people in India—not only by Hindus but also by Jains, Sikhs, and some Buddhists—as well as across the Hindu diaspora.

The festival symbolizes for its devotees the triumph of good over evil, light over darkness, and knowledge over ignorance. Diwali is marked by feasts, lighting clay lamps outside the house to banish evil spirits, decorative lights, prayers, family gatherings, exchanging gifts, burning firecrackers, and doing charity, besides worshiping at homes or visiting temples.

Each year the holiday falls on different dates in the Hindu lunar calendar determined by the position of the moon, usually between October and November. This year, the festival is observed from October 22–26 with Diwali falling on October 24.

CT interviewed Christian leaders in the majority Hindu nations of India and Nepal—as well as neighboring Sri Lanka, Bangladesh, and Pakistan—in order to better understand what South Asian followers of Jesus do during the festival, whether they think Christians should join in Diwali celebrations, and whether churches conduct outreach to Hindus during the holiday.

We as Christians celebrate only Jesus, so we do not celebrate Diwali in our homes. But we connect and engage with Hindu friends during Diwali. We live in a community with different religions and orientations and …