Michael Wear, founder of the Center for Christianity and Public Life, on the state of American politics, what’s at stake in the midterms, and the temptation to “ultimatize” our issues. 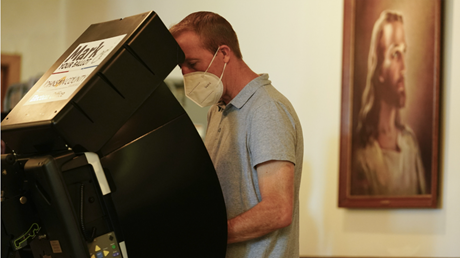 Midterm elections are a time for reassessment—an invitation to evaluate the party in power, but also the political process itself, the health of the body politic, and the effect it’s all having on people’s souls. Two years after Joe Biden won a presidential campaign he characterized as “a battle for the soul of the nation,” voters are heading back to the polls with concerns about inflation, abortion, immigration, polarization, Christian nationalism, and the even future of American democracy.

According to Michael Wear, founder of The Center for Christianity and Public Life, this is an opportunity for believers to reconsider their civic engagement. “Politics needs people with joyful confidence who seek security not in politics but in Jesus,” he argues. “We can break the vicious cycle.” CT started the conversation by asking him to assess the upcoming midterms.

We’re in the final stretch to Election Day. What do you think the 2022 elections say about the state of American politics?

I struggle to find coherent, substantive conversation on anything in these midterms. There are individual races, of course, where there are issues that are getting substantive debate, but it seems clear to me our politics continues to devolve.

We now just get gestures towards issues. Candidates are not actually dealing with the substance, not actually showing an interest in offering a perspective or policy proposals—which means the winner of these midterms won’t really have a policy mandate.

What I do hear is a lot of talk about existential crisis. But the more we load onto our politics, and the higher the stakes, the harder it becomes to really have a democratic process. If an election …