A New Testament “scholar on fire,” he believed Scripture was an encounter with God. 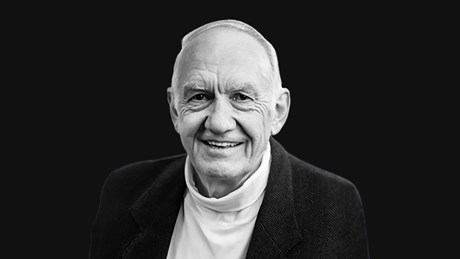 Gordon Fee once told his students on the first day of a New Testament class at Wheaton College that they would—someday—come across a headline saying “Gordon Fee Is Dead.”

“Do not believe it!” he said, standing atop a desk. “He is singing with his Lord and his king.”

Then, instead of handing out the syllabus like a normal professor, he led the class in Charles Wesley’s hymn, “O For a Thousand Tongues to Sing.”

Fee, a widely influential New Testament teacher who believed that reading the Bible, teaching the Bible, and interpreting the Bible should bring people into an encounter with a living God, described himself as a “scholar on fire.” He died on Tuesday at the age of 88—although, as those who encountered him in the classroom or in his many books know, that’s not how he would have described it.

Fee co-wrote How to Read the Bible for All Its Worth with Gordon-Conwell Theological Seminary colleague Douglas Stuart in the early 1980s. The book is now in its fourth edition and has sold around 1 million copies, becoming for many the standard text on the best way to approach Scripture. Fee also wrote a widely used handbook on biblical interpretation, several well-regarded commentaries on New Testament epistles, and groundbreaking academic research on the place of the Holy Spirit in the life and work of the Apostle Paul.

In the same way, Fee argued that studying …