As American evangelicals head to the polls, they disagree about the meaning of the contested phrase. 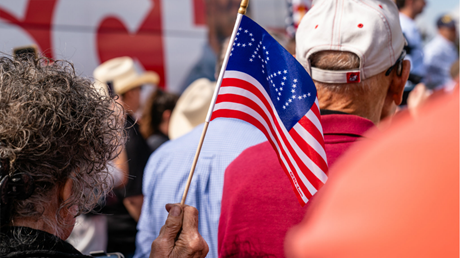 He’d heard it, here and there, but it hadn’t really registered. It was at the edge of his awareness and his vocabulary as he tried to understand the disputes over racism, the pandemic, and the election rocked his evangelical church in suburban Phoenix throughout 2020.

Then the new year started, a mock gallows was erected at the Capitol, and his social media showed some in the mob carried signs that said, “JESUS SAVES.” His mind strained to make sense of the two things together, and he remembered from somewhere that there was a term.

“I needed that phrase to name it,” said Campbell, pastor of Desert Springs Bible Church. “This is a heresy. It’s a complete distortion of Jesus’ doctrine of power. I think Christian nationalism started in the Garden of Gethsemane when Jesus was reaching for the Cross, and Peter, who loves Jesus, thought he should protect him with a sword.”

As the political campaigns ahead of the midterm election have heated up, so has debate about the new political phrase. For evangelicals, the 2022 election has become, in part, a contest over what Christian nationalism is—whether just a slur used against conservative Christians voting their values or something new and malevolent.

Some Republican candidates are claiming the name, a best-selling book on Amazon argues that all real Christians are Christian nationalists, and a growing number of professional and amateur political commentators are using it to explain American politics right now. But there’s still a dispute about who counts as a Christian nationalist and what the term really means.