When we see civic engagement as a limited strategy rather than a source of moral identity, we’re better equipped to reach across the partisan aisle. 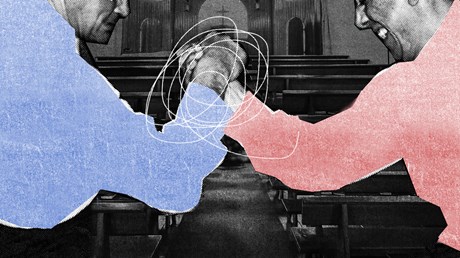 Every election season, some Christians remind us that “Jesus is not a Republican or a Democrat.”

But every election season, other Christians tell us that it’s wrong to vote for a candidate who supports abortion, or that Christians should vote only for candidates who will fight racial injustice.

With issues of grave moral import on the ballot—human life, religious liberty, marriage, economic and racial justice, and health care for the vulnerable—surely God must care how we vote. Yet it’s also clear that Christians can’t agree on how to vote, even when issues related to biblical teachings are at stake.

Some Christians proudly wear MAGA hats, fly large Trump flags, and cheer Republican politicians when they visit their churches, partly because they believe the GOP is the only party that will stop abortion or defend the right of conservative Christians to act on their convictions regarding sexual ethics.

Other Christians write editorials arguing that support for Trump is a surrender of evangelical values, because they believe his actions and rhetoric (echoed by other Republican politicians) cannot be squared with the Bible’s injunctions to love the stranger, care for the poor, or treat other people as divine image-bearers.

How, then, should Christians relate to other Christians with whom they disagree politically? Is there a way for us to find common ground in the gospel, even while being open with each other about our political differences?

There is, but doing so will require us to move beyond an idea that has become pervasive in the United States: the assumption that our morality is defined by our political choices.