But how should Christians be engaging it? 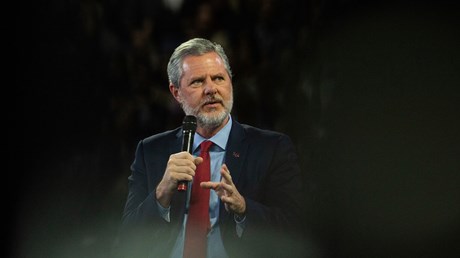 There’s no sanitary way to recount the downfall of Jerry Falwell Jr. How could there be? The saga hinges on an illicit relationship between the former president of Liberty University; his wife, Becki; and a young pool attendant at Miami’s Fontainebleau hotel. Not a great start, and it gets worse.

In 2012 Jerry and Becki seduced the 20-year-old Giancarlo Granda and, over the next seven years, kept him in their thrall with promises of financial success, implicit threats of exposure, and assistance from a well-placed fixer. All this while Falwell presided over one of the largest Christian universities in the world.

It’s no surprise the story would spark all manner of exposés. Rolling Stone, Vanity Fair, The New Yorker, and others have all covered it. More recently, Granda himself has published his side in Off the Deep End. Granda also speaks out in Hulu’s new documentary God Forbid.

Predictably, other sordid tales have surfaced as well, of Becki aggressively pursuing a Liberty student and Jerry regularly showing up to work drunk. The more we learn, the more we cringe. And the hits keep coming.

Pulling back the curtain yet more, the Gangster Capitalism podcast uncovered even deeper levels of corruption at Liberty. That series in turn paved the way for a ProPublica investigation into the school’s mishandling of Title IX complaints, where numerous Liberty students and staff charged the school with indifference and bullying after they reported being sexually assaulted. This alleged institutional misconduct spurred a lawsuit against Liberty that was settled this May.

But that’s far from the last we’ll hear of this tragedy. At least two other television productions about Liberty are underway: …