The new Emmett Till film tells a story of racial apathy that still haunts the church today. 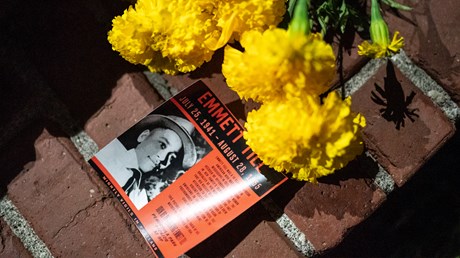 I remember watching with great interest as President Biden signed the Emmett Till Antilynching Act into law on March 29, 2022. After 200 failed attempts over a 100-year span, legislators finally succeeded in outlawing lynching as a federal crime.

My interest in the bill centered on legislators’ decision to name it in honor of Emmett Till, the 14-year-old Black youth from Chicago’s South Side. His 1955 lynching inspired a generation of activists for racial justice.

Till ran afoul of revered Southern traditions when he whistled at a white woman, Carolyn Bryant, while visiting family in Mississippi. In response, Bryant’s husband, Roy, and his half-brother John William Milam abducted Emmett from his family’s home, tortured him, cut his life tragically short by a single gunshot to the head, and then discarded his lifeless body in a nearby river.

He was so disfigured after their vicious assault that his family was able to identify him only by the ring he wore on his hand. Despite overwhelming evidence and even confessions, Bryant and Milam were never held accountable for Till’s lynching.

His mother, Mamie Till-Mobley, brought his mutilated body back to Chicago. Against the wishes of local city officials, she made the courageous choice to hold an open-casket funeral for her son, deciding to “let the world see what they did to my boy.”

The outcry following his death provided a catalyst for the civil rights movement. Rosa Parks would later explain, “I thought about Emmett Till, and I couldn't go back [to the rear of the bus].”

Almost 70 years later, we continue to retell Till’s story in the face of racial controversy.