The increasingly political Christian satire site hasn’t been able to tweet since March, but the platform’s new owner is a fan of the Bee and free speech. 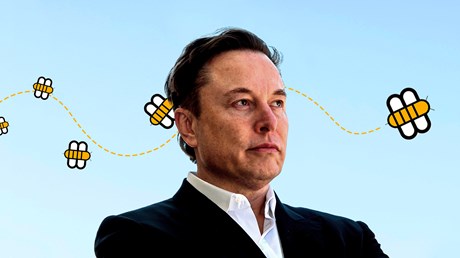 There may be a lesson in the recent troubles of the social giant Twitter.

Don’t mess with The Babylon Bee.

Started as a site to poke fun at Christian subculture, the Bee’s political satire has come to overshadow its more kindhearted Christian humor in recent years, landing the site in hot water with fact-checkers and social media gatekeepers—including Twitter.

Twitter suspended The Babylon Bee’s account on March 22, after labeling a post about transgender Biden administration official Rachel Levine as hateful content. Not long afterward, billionaire Elon Musk, a fan of the site, got a text from his former wife, Talulah Jane Riley.

“The Babylon Bee got suspension is crazy!” read the text, which was made public earlier this year. “Why has everyone become so puritanical?” Then Riley suggested Musk buy Twitter and either delete it or “make it radically free-speech.”

Musk, who recently bought Twitter for $44 billion and instituted mass layoffs, was a critic of censorship on social media long before the Bee’s troubles. But the satire site’s connection to one of the most powerful men in the world is the latest example of the Bee’s rise from a would-be pastor’s side project to a conservative powerhouse.

The Bee, modeled similarly to secular satire site The Onion, began as the brainchild of Adam Ford, who quit his day job in the mid-2010s to start creating web content. Ford’s dreams of becoming a pastor had been derailed by panic and depression, he told The Washington Post in 2016.

With the help of medication, Ford got better and began writing about faith, first for a webcomic and then in 2016 for the Bee. From the beginning, the site was a hit, especially …