Evangelical farmer takes his technique from Niger to COP27 in Egypt, pitching a project in which “everything needed, God has already provided.” 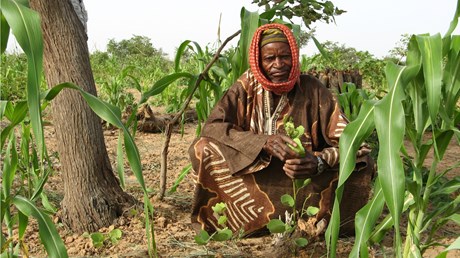 After 18 grueling months fighting desertification in Niger, Tony Rinaudo was near despair. As manager of a small reforestation project for SIM in 1983, he knew few of the 6,000 trees the missions agency had planted yearly since 1977 had survived the arid Sahel climate.

Locals called him the “crazy white farmer,” not wishing to waste valuable agricultural land on more failed efforts. But, trudging on, he loaded another batch of saplings into his pickup truck, struggling to fulfill his childhood prayer.

Years earlier in the threatened Ovens Valley of southeast Australia, Rinaudo lamented the bulldozing of hilly bushland and the killing of fish by drift from insecticides sprayed on tobacco plants—while children elsewhere went to bed hungry.

“God,” he cried out, “use me somehow, somewhere, to make a difference.”

Soon thereafter he stumbled upon I Planted Trees by Richard St. Barbe Baker. One line impressed itself upon Rinaudo, becoming his eventual life work.

“When the forests go, the waters go, the fish and game go, herds and flocks go, fertility departs,” he read from the 19th-century English botanist’s book. (The quote is attributed elsewhere to Scottish science journalist Robert Chambers). “Then the age-old phantoms appear stealthily, one after another—Flood, Drought, Fire, Famine, Pestilence.”

In 1981, Rinaudo settled in Maradi, 400 miles east of Niger’s capital, Niamey. The West African nation’s economic center, on its southern border with Nigeria, hosted SIM’s agricultural project, a hospital, and a local Bible school. Present since 1924, the mission—together with Catholics—established Niger’s largest concentration …