Two-year war ends with the African Union’s first test of transitional justice, as believers continue to debate the rights and wrongs of each side. 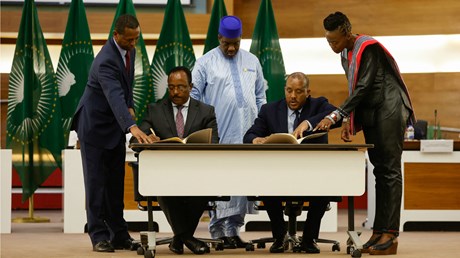 The Ethiopian war in Tigray is over.

On November 2, federal forces and rebel authorities agreed on a “cessation of hostilities,” ending a conflict believed to have killed hundreds of thousands and displaced millions. All sides committed abuses, as documented by the Ethiopian Human Rights Commission and other international observers.

“No one has been clean in this war,” said Desta Heliso, a visiting lecturer at the Ethiopian Graduate School of Theology. “As Christians, we have to feel sorry about this.”

The peace agreement, however, provides for a biblical mandate.

Most negotiations concerned military realities. The two-year conflict in the Horn of Africa nation’s northernmost region—home to 7 million of Ethiopia’s 120 million people—vacillated in advantage between the two sides and between hostilities and humanitarian truce.

But as federal forces pressed deeper into Tigray, peace talks sponsored by the African Union (AU) in South Africa concluded with an agreement for complete disarmament of the Tigray People’s Liberation Front (TPLF) within 30 days. National troops may enter the regional capital of Mekele; assume control of all borders, highways, and airports; and expedite humanitarian aid.

Both sides agree to cease defamation campaigns, and the central government will ensure restoration of communication, transportation networks, and banking services.

But long-term peace may depend on the outcome of a minor clause included among the 15 measures. The federal government agrees to conduct a “comprehensive transitional justice policy” consistent with the AU framework.

Ethiopia will be the first …