New study finds believers aged 18 to 25 more likely than peers or previous generations to get involved in civic engagement. 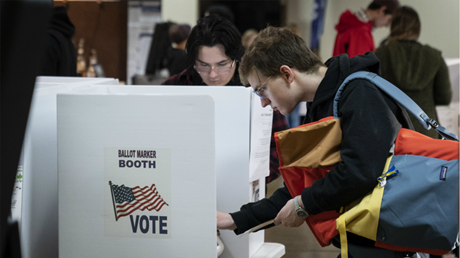 Lydia Franklin says the leaders of her church don’t talk much about politics. But they do talk about Jesus, his commands to love your neighbors, and the importance of Christians helping others.

So when the 18-year-old went to the polls for the first time this election, those are the values she took with her into the voting booth.

“To be evangelical is to follow Jesus Christ and to do as he teaches in the Bible,” said Franklin, who lives in Oklahoma. “I feel that as Christians, we are called to help people. What better way to help than to vote for people that will get the job done?”

Franklin was part of the estimated 27 percent of Gen Z that voted in the midterm election—a notably higher turnout rate than millennials and Gen Xers when they were between the ages of 18 and 29.

The turnout doesn’t surprise Kevin Singer, president of nonprofit Neighborly Faith (NF). He has been looking at younger evangelicals’ civic engagement and the influences on their politics.

A recent NF study, done jointly with Philanthropy for Active Civic Engagement and Springtide Research Institute, surveyed nearly 2,000 people ages 18 to 25, oversampling those who identified as evangelical (24%) and born-again (54%) and asking questions about their views of Jesus and the Bible. They wanted to see how faith shapes civic engagement for Gen Z. What they found is that Gen Z evangelicals are activists.

More than half say it’s important for them to vote, but about 45 percent say they also get involved in community service and fundraising. They are more likely than their nonevangelical, non-Christian, and nonreligious peers to say they believe in advocating for a cause, engaging with local government, and even …