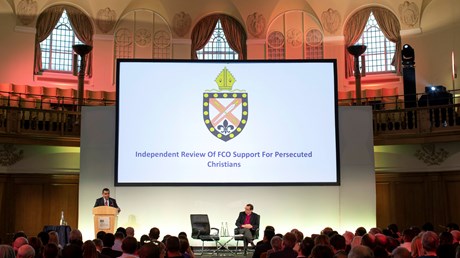 The American government has long committed itself to supporting religious freedom worldwide.

In 1998, the International Religious Freedom Act obliged the State Department to compile an annual report and designate offending nations as Countries of Particular Concern. It established an ambassador-at-large, created an independent bipartisan commission, and placed a special advisor on the National Security Council.

What about the British? Three years ago, the UK government asked itself the same question.

The answer was delivered by Philip Mounstephen, the Anglican bishop of Truro, within the province of Canterbury. The UK’s foreign secretary tasked him specifically to study persecution of Christians, and the 22 recommendations of the Truro Report were accepted in full by the government.

That does not mean they were all implemented.

This past summer, an independent review found good progress, with five points suffering “constraints” and only three with “no substantial action.” As it was released, London hosted the third in-person ministerial which gathered governments and civil society around the cause, following two ministerials hosted in Washington and an online-only one hosted by Poland amid the pandemic. (The UK event used the European nomenclature of “freedom of religion or belief” (FORB) instead of the Americans’ “international religious freedom” (IRF).)

Last month, Mounstephen visited Lebanon to deliver a lecture entitled “Why Our Religious Freedom Matters.” Hosted by the Middle East Council of Churches, the Bible Society, and Saint Joseph University, he presented an outline of Truro Report findings, broadened to include the persecuted of all religious traditions. …