The Reformers believed in burning heretics. Making sense of that grave mistake means looking first at ourselves. 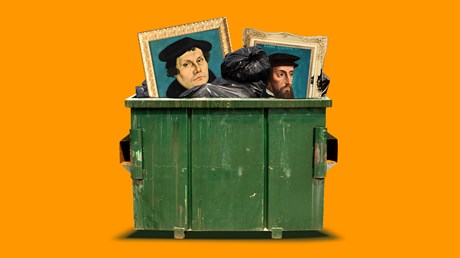 Cancel culture knows no bounds, even historical ones. Based on some un-Christlike writings by Protestant reformers John Calvin and Martin Luther—along the lines of burning heretics—there have been some recent discussions about “canceling” these paragons of church history. The debates sound similar to conversations we’ve had about secular historical figures being canceled for owning slaves, for example.

Unfortunately, it seems every generation of Christian leaders and teachers has had its own problems and blind spots. We should seize these opportunities for self-reflection, to determine if we ourselves might have similar weaknesses.

In 200 or 300 years (if there are still 200 or 300 years of history left ahead of us!), what are we going to look back on as seriously problematic? It’s only recently that most Christians I know have given up smoking, for instance.

There have been great social changes since the 16th century, a time when most Christian leaders considered burning heretics an acceptable practice. In their view, heresy on key issues of the faith was such a serious problem that genuine apostates could not be allowed to live and had to be put to death as a lesson to others.

I live in the middle of Oxford, a few hundred yards down the street from the Memorial to the Martyrs Ridley and Latimer, who were burned at the stake in the 1550s. Those were terrible times. We look back and say, “How could they possibly have done that out of misplaced zeal and loyalty to God and the gospel? What was that about?”

From their point of view, burning heretics was about trying desperately to keep the church and society pure from the devastating, corrupting influence of heterodox teaching. Now …