Chuck Colson–linked ministry has long served Ukrainian inmates but is pushed to the limit by wartime realities—and gospel requirements. 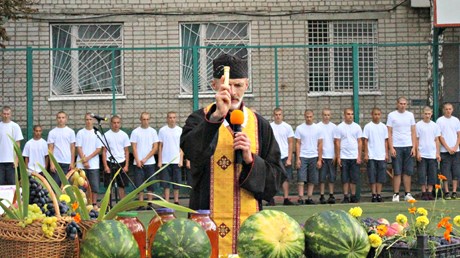 Vyacheslav Kogut was so angry he could spit.

The Russian invasion once again drew him out of his normal ministry as executive director of Prison Fellowship Ukraine (PFU) and into relief work. The military counterattack had just liberated another village on the eastern front, where several civilians had been shot.

The source of his ire, however, was his summons back to prison.

“We have Russian prisoners of war who need clothing,” informed the warden.

“I’ll bring them skirts and dresses,” Kogut shot back, grumbling.

Internally seething at having to leave his injured compatriots, he then remembered his Bible: If your enemy is hungry, feed him—as well as, I needed clothes, and you clothed me.

He went into the storehouse that collected goods for displaced Ukrainians and took the best of its donated items. Security guards at the prison were amazed at the quality. And in addition to the regular food and supplies they offer to Russian POWs in ongoing weekly visits, his team now adds candy and sweets.

“It is a way to show many people, besides these prisoners, that God is love,” said Kogut. “And when they go back to Russia, they can never again return with guns and hatred.”

Affiliated with the international network of the Chuck Colson–founded ministry, PFU began work in Ukraine in 2002. The nation is home to a prison population of 48,000 in 85 still-surviving jails, and Kogut says his team ministers in all of them.

It was not always so. Despite its ecumenical approach from the beginning, PFU’s evangelical orientation worried some prison officials. But consistent ministry to inmates and guards alike won favor, as did the scope of entertainment options presented.