Operation Christmas Child spokeswoman recalls the power of a yo-yo she received in a Ukrainian orphanage. 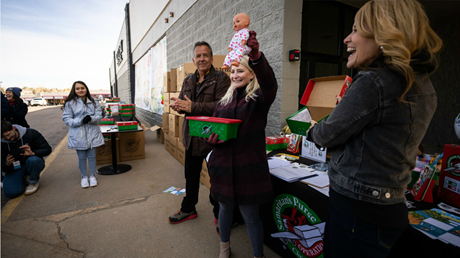 God’s love entered Elizabeth Groff’s life in the form of a yellow yo-yo packaged inside a shoebox.

She remembers the feeling of light—in sharp contrast to the darkness that surrounded her for so much of her childhood.

At the time, she didn’t know anything about Samaritan’s Purse or Operation Christmas Child, which sends shoeboxes of gifts to children in need around the world. Groff was born in a small town in Southern Ukraine. Both of her parents were alcoholics and her father was killed in an alcohol-related accident when she was just a year old, she said.

Her mother wasn’t able to properly care for her on her own, so they went to live with her grandparents. While there, her mother gave birth again to a little girl named Tanya. Their mother was rarely home, so even though she was just a child herself, Groff took on much of the responsibility of caring for her little sister.

“I kind of had to grow up and become the head of the household at a very young age,” she told CT.

Her mother gave birth to a third girl and Groff’s load increased.

Then tragedy struck. Groff’s mother fed the new baby alcohol instead of milk and the little girl died at seven months old.

“That was really hard for me. I was taking care of her,” Groff recalled. “I felt like I did something wrong.”

Although she was only seven, Groff decided in that moment that she needed to find a better life for her sister Tanya. She impulsively decided to run away with the four-year-old.

“I just took her by the hand and got on the bus and we left,” she said.

They didn’t get very far, but it would turn out to be the gateway to a better life for both of them.

The police spotted the …