The screenwriters for “The Chosen” wanted a main character who is not like Superman. 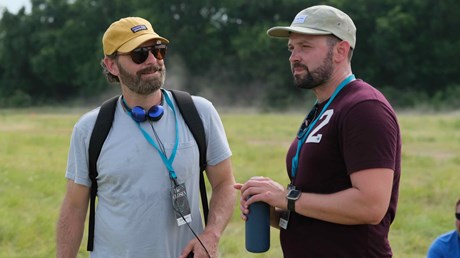 Ryan Swanson and Tyler Thompson, along with director Dallas Jenkins, write the hit show The Chosen, a drama about Jesus’ life through the eyes of his disciples that has millions of views and has been translated into more than 50 languages. The show’s third season premieres November 18, with four more seasons planned.

Jenkins is usually the public face of the show, but CT spoke with Swanson and Thompson at the show’s production location in Midlothian, Texas, this summer when they were shooting their version of the biblical story of Jesus feeding the 5,000 for season 3. The thousands of extras were all fans of the show who contributed to the crowdfunded show or who won a raffle (see our coverage of the shoot here).

You have some experience in Hollywood. How does it make you feel that the Hollywood gatekeepers like Variety haven’t acknowledged the show much?

Tyler Thompson: I don’t take it personally that they haven’t. They have good reason to be suspicious of it, because it doesn’t really make sense—the whole business model, the app of it all. It hasn’t been a large acknowledgment in the Hollywood press, but we do know it’s being discussed in the boardrooms.

Ryan Swanson: If it was blowing up, it doesn’t feel like it would hit us for a while.

Tyler Thompson: Yeah, there’s the show, and then there’s all the noise around the show. The Bible study booklets, calendars, and documentaries—we stay isolated from the social media hype.

Ryan Swanson: It has been nice in a lot of ways to grow at our own pace.

Tyler Thompson: We have our very tight writers’ room of three. And there are many outside forces speaking into it, but it’s really just us. …