Church structures and schedules often make it hard for the working class to participate. Let’s change that. 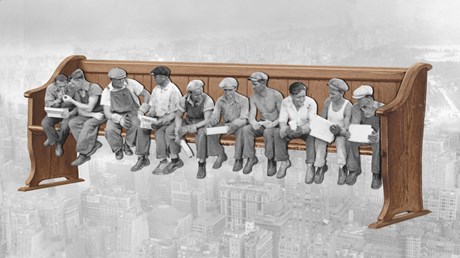 As the holidays come around, with them comes a particular generosity and care that’s often expressed through charity initiatives. For the next month, this spirit will give rise to toy collections, food poundings, and coat drives. A lot of local churches will act as points of access and distribution.

But what if what the poor need something more from Christian communities? What if the gift that churches can uniquely offer them is a place to worship and belong?

One of the most discussed religion stories of the past decade is the rise of the “nones,” or those who don’t affiliate with a specific religious community. Today, that number stands at 29 percent of the American populace, up 10 percentage points in as many years. Pew Research predicts that if current trends hold, nones will be a majority by 2070.

But the data reveals an even more startling picture among the poor and working class. According to Ryan Burge, author of The Nones: Where They Came From, Who They Are, and Where They Are Going, 60 percent of nones make less than $50,000 a year, while only 21 percent have a college degree.

In a word, church affiliation is increasingly the purview of the educated professional classes.

To some, this data might suggest a correlation between religious commitment and the kinds of choices that lead to wealth, based on the theory that faith and local church attendance bring about social success. Others may note that marriage correlates with socioeconomic status, and that adult children of continuously married families are 78 percent more likely to attend church than those from divorced, never-married, or widowed homes. Perhaps those who commit to spouses also end up in more stable places in society.