After a powerful quake hit the island of Java this week, a network of local Christians raced to help. 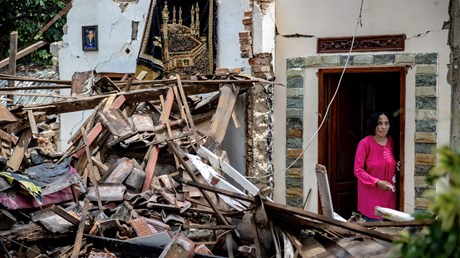 When Denny Tarigan arrived in the remote village of Gasol, the earthy smell of wet soil assaulted his senses.

The sound of ambulance sirens permeated the air. Cars and motorcycles filled the narrow dirt roads. As the Indonesian Christian aid worker looked around, he saw blue makeshift tents lined with mats and blankets that were full of earthquake survivors, including children and the elderly.

What he also saw: Smiles on the villagers’ faces.

“The people are strong enough to survive this,” said Tarigan, who took a 10-hour car ride from his hometown of Yogyakarta to Cianjur, the regency where Gasol is located, on Wednesday.

“Most of them just don’t know what to do after this,” he said. “For now, they think that they need help from the government and other [disaster relief] agencies.”

While it is common in the United States for churches to engage in disaster relief, in Indonesia most humanitarian aid is provided by government agencies, international NGOs, and Muslim aid groups.

It is only in the past several years that Indonesian churches have started to engage in disaster relief, said Effendy Aritonang, the Indonesia country director for Food for the Hungry and secretary of the executive team of Jakomkris, the Christian Community Network for Disaster Management in Indonesia.

When the 5.6-magnitude earthquake occurred on Monday morning, Aritonang, Tarigan, and other members of Jakomkris kicked into action.

Made up of Indonesian nonprofits and churches, the team called for a coordination meeting to begin identifying needs and figuring out who could provide assistance.

A Mennonite group showed up to provide clean water. About 10 doctors and 20 nurses from a Christian …