How a church is enduring uncertainty and disappointment as many struggle to find a home. 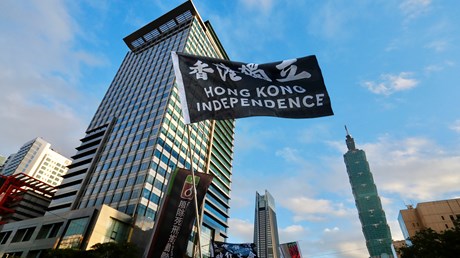 Since Wong Siu-yung opened a church for Hong Kong Christians in Taiwan last year, it attracted more than three dozen attendees. But in that time the only Cantonese-speaking church on the island has faced significant turnover.

A few congregants returned to their previous residence. But most of the 10 who departed moved to the United Kingdom.

“I watched them all give up and leave Taiwan,” Wong said. “Relocating for the second time in such a short period of time is very difficult.”

This week, Wong himself joined the exodus. The 48-year-old pastor boarded a flight Thursday to Nottingham, England, hopeful about making a new home more than 6,000 miles away. This wasn’t a journey Wong had anticipated when he left Hong Kong for Taiwan in July 2020. At the time, his involvement in the 2019 pro-democracy protests had made him a potential government target, so he decided to leave his homeland immediately.

Taiwan initially promised to provide “settlement and care” to thousands of Hong Kongers like Wong. But in the months since, the government has made it increasingly difficult for Hong Kongers to gain permanent residency, preventing many from working and settling on the island. Government officials fear that allowing Hong Kongers to resettle in Taiwan could provoke China and open the door to Chinese Communist Party (CCP) infiltrators.

Wong and his congregation have faced roadblock after roadblock: After selling their homes in Hong Kong, quitting their jobs, and pulling their kids out of school, they arrived in Taiwan to find the requirements to gain residency changed and their cases stuck in limbo. “Hong Kongers have fallen for [the Taiwanese government’s] great scam of the century,” …