The centuries-old tradition has returned to community theaters after a pandemic hiatus. 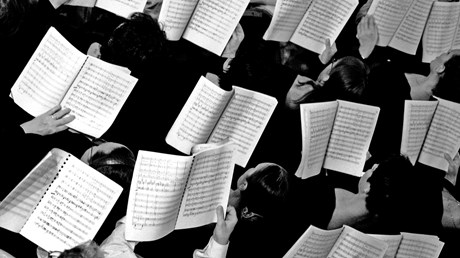 If you attend this year’s performance of Handel’s Messiah by the Des Moines Community Orchestra, you’ll walk into the sanctuary of Grace United Methodist Church and notice the orchestra, of course. But there’s no choir.

Isn’t Messiah famous for the exhilarating “Hallelujah” chorus? What about “For Unto Us a Child Is Born”?

This time, the choir is you—the audience, that is. You can borrow a score, and there are even markings among the seats to divide the audience by vocal part—soprano, alto, tenor, and bass, though sitting in your section is optional.

Messiah sing-alongs, also known as “Scratch Messiahs,” are a long-standing tradition in the United Kingdom and United States, dating back to the first half of the 19th century. Attendees get to step in and cocreate a centuries-old musical work that tells the story of Christ’s life from incarnation to resurrection.

For the Des Moines orchestra and many other community groups and ensembles around the country, this year is bringing a return of the tradition after a two-year pandemic hiatus.

“There’s nothing like conducting it,” said Carl Johnson, the conductor of the Des Moines Community Orchestra for the past 20 years. “It’s so big and powerful. And you look out at the audience, the looks on their faces … that’s worth it.”

Handel’s Messiah premiered in Dublin on April 13, 1742, as a charity concert benefiting two hospitals and prisoners’ debt relief. Although the work is now associated with Christmas, it is historically linked to Easter: Handel conducted annual Easter performances of Messiah at the Foundling Hospital in London beginning in …