In the story of the Incarnation, symbols of death and danger remind us of God’s renewal. 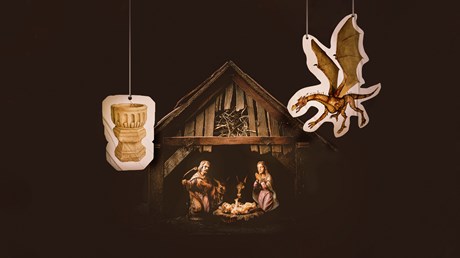 The next time someone wants a good Advent book, Fleming Rutledge recommends Cormac McCarthy’s The Road, which deals with the total breakdown of society. There is no hope in sight, only cruelty. Like voices crying in the wilderness, a father and son travel through the ravaged wasteland of what used to be the United States, stewarding the one thing they have left: tender love for one another.

“Advent,” Rutledge notes, “is not for sissies.”

What can apocalyptic bloodbaths teach us about Christmas? How can they prepare the way for Christ’s coming?

Stories like The Road invite us into the stark realism of what Mary and Joseph faced under the cruel inflexibility of Roman rule and the hopelessness that all of humanity has faced to varying degrees over time. Their literary genre confronts us with death, judgment, apocalypse, and hell—just as Scripture does.

Exhibit A: The Book of Revelation, known in the King James era as the Apocalypse. Some scholars place John’s writing of the book as prior to the Gospels. That would mean his “nativity” would have been the first one told.

His Spirit-inspired perspective on the birth of Jesus might surprise us: “The dragon stood in front of the woman,” he writes, “who was about to give birth, so that it might devour her child the moment he was born” (Rev. 12:4).

The dragon of Revelation has indeed invaded our nice, tame Nativity scenes. Perhaps we need The Road or its sequel, Blood Meridian to shake us out of our stupor and remind us that we too have been faced with a spiritual desolation of apocalyptic proportions. Or perhaps we need the literal voice of one calling in the wilderness.