State judge says the school’s legal strategy was a mistake. 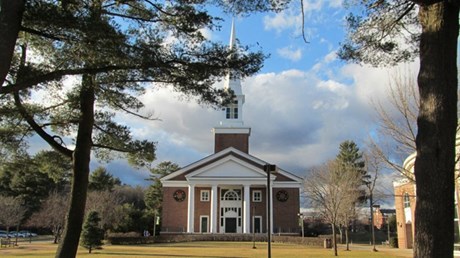 Gordon College has a reached a settlement with a social work professor who alleged discrimination when she was denied promotion. President Mike Hammond and board chair Carrie Tibbles notified faculty and staff in an email this week.

“We are pleased to finally reach a resolution of this dispute,” the email said. “This has been a protracted legal journey through the judicial system which we did not seek out but were compelled to pursue, and one which we know has been at times uncomfortable for Gordon as a strongly relational community.”

Margaret DeWeese-Boyd claimed the administration punished her for critiquing the school’s sexuality policies and arguing those policies hurt her LGBT students. She also said the school treated her more harshly than male colleagues who took similar stances.

The prominent evangelical college disputed the facts of the case but spent most of its time in court arguing DeWeese-Boyd should legally be considered a minister, and thus not protected by federal laws prohibiting discrimination in the workplace. Gordon’s lawyers said the “ministerial exception”—first articulated by the Supreme Court in Hosanna-Tabor Evangelical Lutheran Church and School v. Equal Employment Opportunity Commission—should apply to Christian college professors.

The Massachusetts Supreme Court rejected the ministerial exception argument in 2021. The US Supreme Court declined to hear the case in March 2022.

A few months later, as the discrimination case moved forward in state court, judge Indira Talwani told Gordon’s lawyers they had messed up by trying to make too big of a move too quickly.

“If I was sitting in your client’s position, I’d be sitting …