Chinese believers reflect on the relationship between faith and culture and rethink their seasonal evangelism. 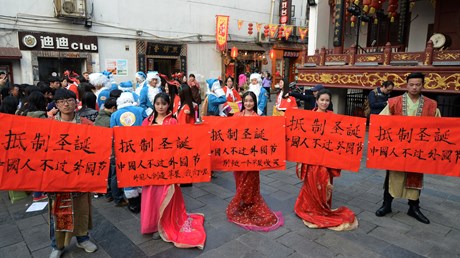 On Christmas Eve in 2018, media technology researcher Su Lun experienced a sense of depression while walking on the campus of Nanjing University. It was like walking into Narnia in the middle of a hundred-year-long winter “surrounded by few people and silence, and not feeling any semblance of a Christmas atmosphere.”

On the same day, he received a notice in a college students’ WeChat group that read, “Today, tomorrow, and the day after tomorrow, it is forbidden to post pictures or words about Christmas Eve, Christmas Day, or holiday celebrations in this group. We only celebrate Chinese holidays. We don’t need foreign holidays!”

That year, several Chinese universities and secondary schools banned students from celebrating or talking about Christmas on social media. And governments in several cities in the provinces of Hebei, Guizhou, and Guangxi issued bans on businesses putting up Christmas decorations. The Chinese government also implemented new regulations governing religion, kicking off a harsher round of persecution against Chinese house churches.

As Christmas approaches this year, just weeks after the Chinese government revised its pandemic policies, Christians feel the weight of suspicion and persecution. They wonder what the holiday—and the evangelistic outreach that typically goes with it—will look like in the changing political context.

For more than a decade, intellectuals have called for a boycott of Christmas because they view it as “a foreign holiday.” In 2006, ten scholars from Peking, Tsinghua, Nanjing, Wuhan, and other universities wrote an open letter advocating a boycott against Christmas and the “Christianization” of Chinese people. They …