A new song highlights a growing interest outside the Egyptian church in reviving an ancient language of the Christian world. 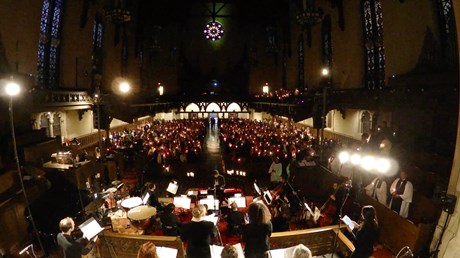 The darkened New York church was packed with almost 1,000 congregants holding candles, as a group of six singers sung out Christmas news in an ancient language few New Yorkers had ever heard.

The choir was performing a new song by composer Laura Jobin-Acosta in the Coptic language, which is nearly extinct except for where it pops up in Coptic liturgy. It is very unusual to have new art in Coptic and in a Protestant worship service, say Coptic leaders.

Calvary-St. George’s music director, Kamel Boutros, was born in Egypt and grew up in the evangelical church there. He wept as he conducted the new song at the service.

“I felt God’s presence,” said Boutros. “I felt Jesus’ love for every single soul in that space. I hadn’t felt something like that for years.”

An ancient language that originated before Christ and incorporates hieroglyphics and Greek, Coptic is a term that also applies to the earliest Christians in first century Egypt. The growth of the language coincided with the growth of Christianity there. The country’s Coptic Orthodox Church is its oldest church, but today in Egypt, Christians across traditions—both Orthodox believers and evangelical Protestants—identify themselves as Copts.

The Muslim conquest of Egypt in the 600s eventually established Arabic as the predominant language instead of Coptic. Today there are almost no native speakers of the Coptic …