Breaking with tradition, local Orthodox leadership grants the faithful its blessing to move celebrations from January 7 to December 25, continuing separation from Russia. 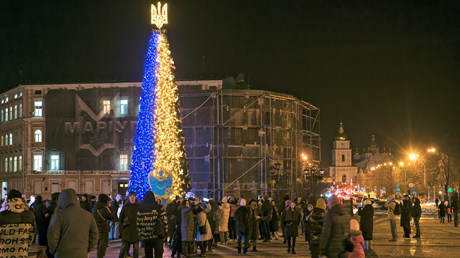 Thanks to Russia, Ukrainian Orthodox Christians may now partake in a Christmas feast on December 25.

The joyous, 12-dish celebration has been their timeless practice—on January 7, according to Eastern tradition. But this year, the Holy Synod of the Orthodox Church of Ukraine (OCU) has permitted its clergy to conduct religious services on the same date as Western tradition, granting a one-day exemption to the 40-day Nativity Fast.

Beginning after the feast day of St. Philip, observed by Russian Orthodox on November 28, the faithful abstain from alcohol and most meat products until the first star appears on Christmas Eve, January 6. But with millions of refugees in Europe witnessing the revelry of fellow Christians in the West, the OCU decided to permit Ukrainians everywhere to decide parish-by-parish which date they would honor.

Liturgical reform has long been on the agenda, but war was the spark.

“For most bishops of the church, the calendar is not a dogmatic issue of faith,” said Archbishop Fedir, head of the youth department of the OCU. “Especially after the full-scale aggression of Russia, there is a desire to become part of the Western family of churches.”

Ukraine had already established December 25 as an additional official Christmas holiday in 2017, joining Belarus, Eritrea, Lebanon, and Moldova as nations that formally celebrate the birth of Christ twice.

But altering the calendar disrupts the entire church cycle. Saints’ days, sermons, and gospel readings are all impacted, with scholastics engaged in response. The Holy Synod decision tasks priests with gauging the sentiment of parishioners, and bishops with followup research. Many believers love their traditions, Fedir said, and the …