5 questions about the global icon you see every Christmas. 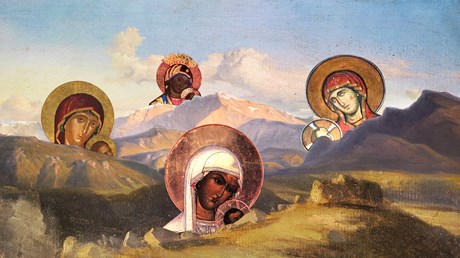 The Virgin of the Passion, also known as Our Lady of Perpetual Help, has been called the most popular Christian icon of the 20th century. I would argue the same applies to our own century as well. As an art history professor, I’ve been chasing her around the globe for nearly two decades (and have now collected those studies in my recent book, Mother of the Lamb: The Story of a Global Icon).

Here’s what you need to know about her.

1. Where does the story of the icon start?

The first surviving instance of the image appears on the island of Cyprus, where the icon was painted as an Eastern Orthodox response to Western Crusaders occupying the island—specifically King Richard the Lionheart of England and the Knights Templar. After the Knights slaughtered the Orthodox population on Easter morning of 1192, the image was offered as a prayer of lamentation. The angels flanking Mary traded their scepters of triumph for instruments of defeat: the cross, the spear, and the sponge.

Jolted from their onetime position of power on Cyprus, the island’s Orthodox inhabitants were forced back to the original political conditions once faced by Mary and Jesus. As the Byzantine Empire slowly crumbled, the Virgin of the Passion emerged. From the crags of the Balkans to the caverns of Mediterranean islands, this icon surfaced wherever Eastern Christian political power lost its ground.

Given those origins, the icon is relevant to Christians anywhere in the world who may be losing the power and influence they once enjoyed. The image tells us that sometimes the loss of power is not an end but a beginning.

2. What are some contemporary examples of this image?

Well, there are too many to count. The Virgin of the Passion shows up in The …